Functional Medicine is patient- centred medical healing at its best. Instead of looking at and treating health problems as isolated diseases, it treats individuals who may have bodily symptoms, imbalances, and dysfunctions.

As the following graphic of an iceberg shows, a named disease such as diabetes, cancer, or fibromyalgia might be visible above the surface, but according to Functional Medicine, the cause lies in the altered physiology below the surface. Usually, the cause of the disease and its symptoms is an underlying dysfunction or an imbalance of bodily systems.

Named diseases are just the tip of the iceberg. Below the surface, according to Functional Medicine, are the real causes of a patient’s health problems. 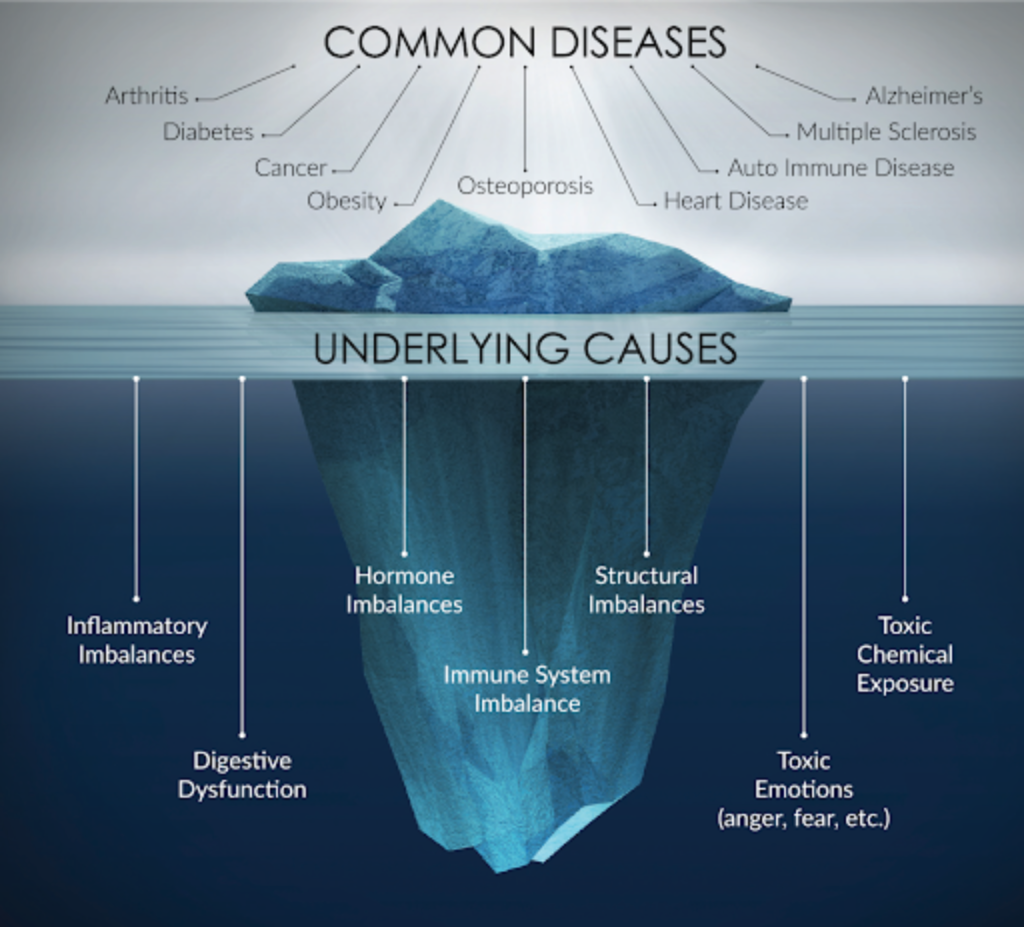 If health care treats just the tip of the iceberg, it rarely leads to long-term relief and vibrancy. Identifying and treating the underlying root cause or causes, as Functional Medicine does, has a much better chance to successfully resolve a patient’s health challenge.

Today’s health care system is in trouble because it applies a medical management model that works well for acute health problems to chronic health problems, where it is much less successful.

If you have a heart attack, accident, or sudden lung infection such as pneumonia, you certainly want a quick-thinking doctor to use all the quick-acting resources of modern medicine, such as life-saving technology, surgery, and antibiotics. We are all grateful for such interventions.

However, jumping in with drugs, surgery, and other acute care treatments often does not succeed in helping those with chronic, debilitating ailments, such as diabetes, heart disease, or arthritis. Another approach is needed.

Plainly put, your body naturally wants to be healthy. How- ever, the body may be missing things needed to function at its best, or something might be standing in the way of its optimal functioning. Functional Medicine first identifies the factors responsible for the malfunctioning. Then it deals with those factors in a way appropriate to the patient’s particular situation.

Functional Medicine practitioners often use advanced laboratory testing to identify the root cause or causes of the patient’s health problem. Old-fashioned medical diagnosis helps too, in the form of listening carefully to the patient’s history of symptoms and asking questions about his or her activities and lifestyle.

For treatment, Functional Medicine practitioners use a com- bination of natural agents (supplements, herbs, nutraceuticals, and homeopathies), nutritional and lifestyle changes, spiritual/ emotional counselling, and pharmaceuticals, if necessary to prod a patient’s physiology back to an optimal state. In addition, educating patients about their conditions empowers them to take charge of their own health, ultimately leading to greater success in treatment.

Treating Symptoms Versus Treating the Person

In the dominant health care model today, medication is used to get rid of people’s symptoms. If the patient stops taking the medication, symptoms generally return.

Functional Medicine approaches health problems differently. Instead of masking the problem, it aims at restoring the body’s natural functioning. Although Functional Medicine practitioners may prescribe pharmaceuticals, they use medications to gently nudge the patient’s physiology in a positive direction so the patient will no longer need them.

For example, conventional doctors would normally prescribe pharmaceuticals like Prilosec, Prevacid, or Aciphex to treat acid reflux or heartburn. When the patient stops taking such drugs, the heartburn symptoms come back. In contrast, a Functional Medicine practitioner might find that a patient’s acid reflux is caused by Helicobacter pylori bacteria. Eradicating the Helicobacter pylori might very well lead to the end of heartburn symptoms, permanently.

It’s also important to note that in Functional Medicine treatment for similar symptoms might vary tremendously for different patients, according to their medical histories and results of laboratory tests. Factors that can come into play in producing the same symptoms include toxic chemicals, pathogenic bacteria, parasites, chronic viral pathogens, emotional poisons like anger, greed or envy, and structural factors such as tumours or cysts.

The Roots of Functional Medicine

You may be surprised to learn that the concept of Functional Medicine isn’t new. It actually represents a return to the roots of modern scientific medicine, captured in this statement by Sir William Osler, one of the first professors at Johns Hopkins University School of Medicine and later its Physician-in-Chief: “The good physician treats the disease; the great physician treats the patient who has the disease.”

Another important saying by Osler is: “If you listen carefully to the patient, they will tell you the diagnosis.” This encapsulates the importance that Functional Medicine places on taking a thorough history from the patient.

Your Experience of Functional Medicine

When you consult a Functional Medicine practitioner, the first step is always your history. Practitioners are trained on how to unravel and make sense of a complicated story. Often clues in the story lead to the identification of key imbalances.

The next set of clues comes from a comprehensive physical examination, which includes many nearly forgotten examination procedures used by famous diagnosticians (both living and long gone), such as chapman reflex points, ankle brachial reflex, and nail inspection.

The final set of clues comes from advanced laboratory testing. Innovative, cutting-edge lab tests help the practitioner look deeply into a patient’s physiology to identify how it has been compromised and how physiological balance can be restored.

After diagnosis and treatment, a Functional Medicine patient can expect his or her symptoms to diminish in severity, along with a renewed sense of well-being and significant increase in health and vitality.

The patient was an adult male with a chief complaint of sinus infections and allergies for a period of six years. He had previously consulted with three medical physicians. Medical testing included a CT scan of the sinuses, which was negative for any pathology. Treatment consisted of the following prescriptions: Sudafed, Claritin-D, and Allegra. Results were poor.

Based on an extensive history and review of his medical re- cords, Dr. Grisanti ordered an Airborne Allergy test and food sensitivity test. The results revealed that the patient was highly allergic to Aspergillus fumigatus and Alternaria alternata moulds. Dr. Grisanti instructed the patient in how to identify moulds in his residence and at work and what steps to take to eliminate them. The patient was prescribed a natural pharmaceutical that increases his immune system’s defence against moulds and fungi. After three weeks, the patient was completely free of symptoms and has remained that way for the past two years.

The patient was a 27-year-old female with an 11-year history of irritable bowel syndrome and fatigue. She had previously consulted with four medical physicians before scheduling an appointment with Dr. Grisanti.

Medical testing included an upper and lower GI study and colonoscopy, all of which were found to be negative for any pathologies. Treatment consisted of the prescription Hyoscyamine. Results were poor.

Based on an extensive history and re- view of her medical records, Dr. Grisanti ordered a Digestive Stool Test and Allergy Blood Test. Two bacterial pathogens were found to be infecting her intestines: Pseudomonas aeruginosa and Citrobacter freundii. The medical literature clearly linked these two pathogens to diarrhea disease. In addition, her allergy test revealed a significant sensitivity to gluten and rice. The patient was prescribed a natural pharmaceutical that helped eradicate the two bacterial pathogens and was placed on an elimination diet addressing the rice and gluten.

After one month, she was symptom- free.

The patient was a 61-year-old female with menopausal symptoms, including hot flashes, decreased libido, and weight gain over a period of five years. The patient had previously consulted with one medical physician, who per- formed no medical testing. Treatment consisted of the prescription Estrace. Results were fair, but the patient was concerned about the drug’s potential side effects.

Based on an extensive history and review of the patient’s medical records, Dr. Grisanti ordered a Women’s Hormonal Panel. The results were quite revealing. Her estrogen/progesterone balance was significantly compromised, with too much estrogen and not enough progesterone. This imbalance was the main cause of the patient’s roller-coaster emotional challenges.

After presenting this information to her physician, she was prescribed the proper balance of estrogen and progesterone. The patient eventually went to a compounding pharmacy and had a special formula of estrogen/progesterone made. She became symptom-free and experienced an increase in energy.

In addition, she lost 54 pounds in eight months.

I used to be a runner. I ran competitively in high school, and then continued…

I recently read an article by Dr George Lundberg on Medscape  (George D. Lundberg. Guideline vs…

I have been a chiropractic physician since 1983. A lot has changed in health care…

I am often asked why I became a chiropractor. I thought I’d take this week’s…